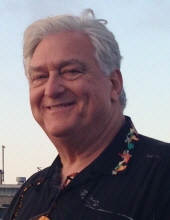 Alan Lee Culley , 72, passed away November 10, 2018, in Santa Rosa, California, surrounded by his five loving children and brother, Rick. Born to George and June Culley in Winfield, Illinois, he graduated from West Chicago High School in 1965 and College of DuPage in 1973. Alan, known to his many friends as Big Al or Leo, was a truck driver and transportation specialist. He once traveled from Chicago to San Francisco in 30 hours, and had hauled an army tank, a space shuttle for NASA, and hundreds of tons of fruits and vegetables from “coast to coast, border to border.” Having crossed the U.S. hundreds of times, he knew someone in every town he went to, or made a new friend while there. He knew every state capital. He collected elk antlers in Wyoming, turquoise in Tucson, and fine wool blankets from Oregon. He was an accomplished amateur pyrotechnician. He had an exceptional appetite and enthusiasm for fine food and was often the life of a party. He was a generous host and knowledgeable tour guide. He was just as comfortable at a Waffle House in Missouri as he was in fine restaurants in Chicago or New York. He was very proud of his southern Illinois coal country family roots. He was a loving and proud father. Alan is survived by his beloved offspring, Cynthia Anne, George Ryan (Cindy), Gregory Richard (Ingrid), Patrick and their mother, Deborah Vincens Culley; his son Andrew and his mother Janet Oldfield; his grandchildren, Cory Logan, Patrick Antavas, Landon Lee, Rya Marie, and Kaitlin Jessica Culley; his brother Richard George Culley, his wife Connie, and their children Willam, Emily, Deryck, Luke, and Anna, all of New York state. He was also survived by and grateful to his Culley cousins who came to his aid during his last journey. In lieu of flowers, please celebrate Al's life and friendship with a great meal and a fine wine. He'll be with you in spirit. Visitation will be Saturday November 17th from 10:00 a.m. until time of funeral service 12:30 p.m. at Norris-Segert Funeral Home, 132 Fremont St. West Chicago. Interment to follow at Glen Oak Cemetery in West Chicago.

To order memorial trees or send flowers to the family in memory of Alan Culley, please visit our flower store.