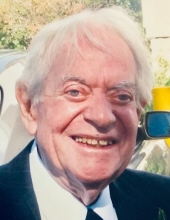 Al T. Browne , age 92, of West Chicago, passed away on September 10, 2019. He was born on July 28, 1927 in Chicago, IL to Theodore and Eleanore Browne. Al was united in marriage on October 14, 1947 to Betty Ebeling. Throughout his life, Al worked as a salesman for Club Aluminum in LaGrange, IL, in the electronics department of JC Penney in Yorktown and Woodfield Malls, and for West Chicago School District 33 until his retirement. Al loved music, and played drums for the Skokie Indians and was an instructor for the Chi Angels Drum and Bugle Corps. Al was a lifelong member of the Chicago Federation of Musicians. He was a die-hard Chicago Cubs fan (whether going to the games or watching them on TV), enjoyed reading the newspaper with his shirt off in the driveway, and loved spending time with his family, whether going to Cedar Lake in Lake Villa or to the Lincoln Park Zoo (because it was free).

Visitation will be held on Saturday, September 14, 2019 from 12 p.m. until time of service at 3 p.m. at Norris-Segert Funeral Home & Cremation Services , 132 Fremont St. (one block north of Washington St. and Main), West Chicago. Reverend Sue Ebersold officiating. Interment Private. Contributions in Al’s memory may be made to DuPage PADS , 601 West Liberty, Wheaton, IL 60187. For Info 630-231-0060 or www.norrissegertfh.com

To order memorial trees or send flowers to the family in memory of Al Browne, please visit our flower store.